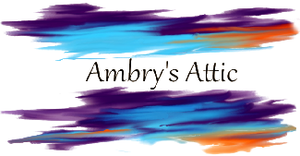 How Our Store Got the Name Ambry

Misty Sirianni and her husband have two beautiful daughters, Amanda and Bryana. Combining their names gave the name Ambry.

Misty Sirianni's family has always rescued animals. At this moment, they have three dogs and three cats, all of which found them. The funny thing about rescues; they seem grateful and graciously welcome their fellow brothers and sisters into the fold. Misty Sirianni and her family have never had a problem with personality or species conflicts. Misty started collecting things (and not anything in particular) because she became saddened, thinking that no one wanted them anymore. She and her family picked them up, cleaned them off, and repaired them if they could. As they continued to rescue items, their home became overrun.

Misty then opened an antique and vintage booth at a local store and found a lot of joy in providing these treasures with their "forever homes." Several years later, their store, Ambry's Attic, was opened on March 5, 2019, in Blairsville, Georgia.

What Makes Us Special

At Ambry's Attic, we only sell handpicked items after close inspection and research. The price tags of our merchandise are so large that we provide the information directly to you. Some of them also have QR codes.

We are committed to providing a pleasant environment for your shopping experience. We also maintain a wish list for customers who are searching for specific and special items that are difficult-to-find. If we know of a resource for your search for the perfect fit, we will happily provide it to you!